Clearwater Floral Fest 2009 31 Oct – 2 Nov, 2009.
The show lived up to its reputation as one of the best in Perak, with a wide range of old favorites and younger breeds, plus the usual good selection of cool growing types from Cameron Highlands. Especially striking are the extensive collections of Phal. violaceas and bellinas for which this part of Perak was known for. The Vandas section was also very impressive followed by the Cattleyas and Dendrobiums (species).

The sales area did brisk business and the three vendors , Ow a local, Matt from England living in Cameron Highlands, and Ivan Pottillo from Equador, have a virtue monopoly over the weekend crowds – now used to visiting this golf resort for its many varied activities – enjoyed themselves admiring the plants and visiting the animals in the mini-zoo. The was also an art exhibition and a booth was allocated to The Heritage Society of Ipoh. 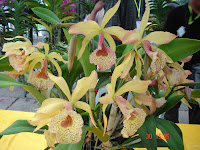 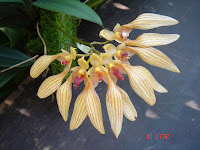 The Show was memorable for its relatively large number of overseas visitors – as many as 19 orchid enthusiasts from Taiwan came to judge and enjoy the show. For many of them, this was their first trip to Malaysia, not to mention their first experience with a local orchid show. The group was led by a long time friend of Perak Orchid Society, Chen Long-Huei of Jumbo Orchids and his fellow grower Huang Wen Roong of Jia Ho Orchids Nursery and later also took the opportunity to travel to other states to visit more nurseries.
Posted by Robert Ang at 5:36 AM No comments: