This show sponsored partly by Orchid Society of Malaysia was held on the 28 June to 3rd of July 2011 at Dataran MBI (Opposite Parkson Parade) and was officially opened by YB Hamidah Osman at 5pm 28 June 2011.

In the opening speech of the President Dato Dr Majumder, she thank YB Dato Hamidah for supporting the society financially and that the Society has made an impact in Perak with our monthly show and has promoted orchid not only as a source of pleasure and revenue to many but also has attracted many tourists to come to visit Perak. In order to attract more tourist to Perak the Society will be organising an International Orchid Show in Kelly Castle Batu Gajah to coincide with the World Orchid Conference in November 2011 with the aim to encourage participants going to the WOC to extend there trip and come to Perak to see this show.

YB Dato Hamidah reply speech she said that orchid industry is important to the State of Perak and that it will be included in their activities during Visit Perak Year 2012 organised by Tourism Perak . Two shows one in April to commorate the Sultan f Perak Birthday in Kuala Kansar and another in June has already been earmarked and included in the programs. A pledge of RM 5000 was given to the Perak Orchid Society.

During the high tea that followed, YB Datuk Hamidah agreed to be the Patron of Perak Orchid Society.

The show attracted over 340 enteries, in 41 classes, a respectable figure. considering the prolonged dry hot weather especially in the State of Perak. 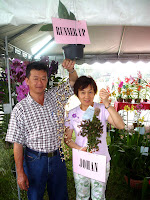 After the presentation of the top prizes, Dato Majumder with the rest of the committe members escorted Dato Hamidah to view the orchids entered in the show.

A few foreigners and tourist visited our show. Mr Petiot Gerard a professional photographer was seen taking photographs of the best plants. Two of them are reproduced with his written consent and we request that whoever wants to use his photographs must first get his permission through us.

Another couple from England was also seen in our show. Our Deputy President Mr Leong Tuck Lock (center) is seen here together with Mr Fletcher and Donna Baylis. 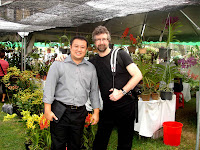 Posted by Robert Ang at 6:18 AM No comments: