POS Biennial General Meeting and Orchid Show Sunday 27 March 2011
This year's BGM show was held at Garden Villa, 5 Jalan Raja Dr. Nazrin Shah (formerly Gopeng Road), Ipoh. This venue was offered by Mr. Jek Yap to our society to hold our orchid show and also our Biennial General Meeting and we want to take this opportunity to convey our heartfelt thanks for his kind gesture in helping our society during the last few years. As expected, another record entry of over 200 plants of very high show quality were brought to the show. The show started at 9a.m and by 11a.m we had in our register pants. Judging began at 11.30a.m.

g with his entry of Phalaenopsis Yungho Gelb Canary. This plant which was bought from Taiwan has 18 perfectly formed unblemished flowers. If you have any experience with white novelties, you will appreciate the difficulty of maintaining each flower in perfect form before the show. Mr. Liew, a extraordinary grower has won many Grand Champion prizes with his submissions ..... Congratulations !!

The Runner Up Champion went to Mr. Theow Kim Fook with his entry of Ionopsis utriculariodes, a very showy plant with more than 10 spikes in bloom.

Lunch of nasi lemak and fried chicken was served to everyone in the show. The food tasted exceptionally good ... maybe because we were all very hungry. The meeting started at 1p.m and after our President, Dato' Dr. Majumder called the meeting to order, she gave her address. Minutes of the last BGM were read and approved, BGM report for year 2009 / 2011 was also adopted and Statement of Accounts for year 2009 / 2011 was also adopted. Election of office bearers for year 2011 / 2012 commenced and the following members were elected:

Congratulations to each and everyone who has been elected and we hope that 2011 and 2012 will be better years. 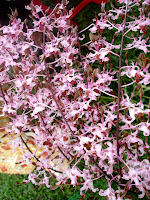 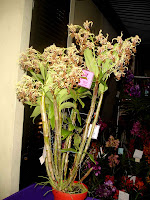 Taiping Orchid Society
Taiping Sentral Show held from 4th to 12 March 2011
The show organised by Taiping Orchid Society was one of the best that I have seen so far. There were so many plants that could have won the grand champion and the deserving ones that won are as follows:
Grand Champion: Den spectabile entered by Mr. Sin Chan Wah
Reserved Grand Champion: Catasetum Jumbo Pearl entered by Teh Tian Lai

A total of 448 plants were entered. Apart from the orchid show, more than 10 vendors were doing brisk sales by the side of the shopping center.
For more photographs please go to my facebook:
Robert Ang
Taiping Sentral Orchid Show 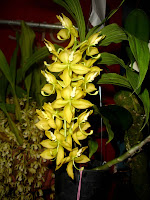 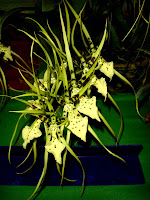 
The first show of the year attracted 192 entries with some very showy exhibits. The phalaenopsis novelty section was very well supported with an unusually large entry of P. bellina.


The Best Plant of the Show went to Mr. Liew Lip Yaw with his entry of Bulb. plumatum.

The Runner-up Best Plant was won by Mr. Cha Chuan Tuck with his entry of Epi. stamfordianum

The show was well supported even though there was another show running concurrently in Penang.

As usual our member-artist, Mdm Oh Chow Moy was there putting on paper a beautiful Bulb. annandallei. In fact her presence helped to draw in the crowd and turned the whole show into a carnival mood.

As one of our aims in holding our monthly orchid show is to promote Ipoh to tourist and people outside Perak to visit our city, we have a couple from England on holiday here and they were amazed with the beauty of the orchids displayed. Photo below showed them with POS members, Leong Tuck Lock and Wong Kai Meng.

To view more photographs of the show please go to my facebook.
Robert Ang
Pos January Orchid show
or