Another very successful show organised by the Perak orchid Society held on the vacant lot between Ipoh Parade and MBI.

A total of 182 plants were entered by 22 participants in 22 classes. Prize money of RM12:8:5 were given for the 1st:2nd and 3rd placing respectively for the winners of the 22 classes. 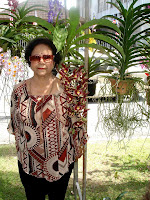 The Best in Show, a Catesetum tenenubusum x Penang, with a Prize of RM30 was awarded to Ching Kwee Sin. The prize winning plant is in the photograph on the right with Dato' Dr Majumdar only, as Mr Ching was not present during the photo session. 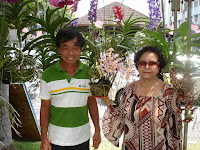 The runner-up prize of RM20 was won by Chan Chee Meng with his entry Den. farmeri.


The Vanda and Asco sections as usual were well supported. To view the rest of the photos please go to facebook as follows:

The next show will be on Sunday 17th October 2010 same time same place. If you want to enter your plants for this show please go to the registeration table on Sunday and join as a member of our Society.

Posted by Robert Ang at 1:52 PM No comments: