This annual affair, held on 3rd. to 7th. of November 2010 was officially opened on 3rd. of November by Councillor Kok Pak Foo, representing Dr Mah who was unable to attend. In his speech he expressed the state's support of the orchid industry in Perak and pledged RM2000 to our Society on behalf of Dr. Mah.

Our President, Dato Dr. Majumder then gave Mr. Kok a Phalaenopsis as a token of our appreciation.

The show was well attended and 330 exhibits of outstanding quality were entered. Entries from as far as Penang, Taiping, Kuala Lumpur and Johore were on display. Out of 40 classes offered, 37 classes were taken up and prizes of RM50, RM30 and RM20 were given to the 1st, 2nd and 3rd of each class respectively. Best in Show (RM300) was won by Mr. Robert Ang of Eucharist Orchids Nursery and Laboratory with his entry of Ctsm. Penang x Ctsm. pileatum.

The Best Runner Up (RM200) went to Mdm. Lim Mui Hua, with her entry of Phaph. rothschildiana. The contest for the Best and Runner up was a closely fought one. The judges comprising of 70 percent members from other societies had a hard time in the selection. The decision was split in the middle - a draw - and the Show Manager had to give his castng vote to determine the winner. 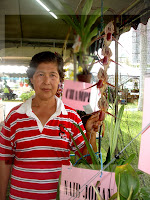 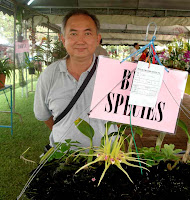 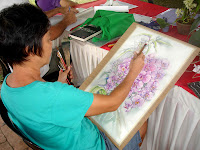 The love of orchids is not confined mainly to the gardens of the enthusiasts and the show competition but is also expressed on canvas by one of our members Madam Oh Chow Moy, a self taught artist. She comes daily to the show to paint orchids which mesmerised surrounding observers with the freshness of her painting. She would ask our committee members for the name of the orchids she painted so as to name it accordingly. She even kindly sponsored one of her paintings for auction during our Orchid Nite Dinner which raised RM100 for the society.


The Society wishes to thank the following for their hard work in making this show a success:


and many others not named

The Annual Orchid Nite Show was combined with a Dinner which was held on 6th. November 2010 at the ICCC where members and friends got together to enjoy a good halal chinese dinner. During the dinner, there was a lucky draw, a treasure hunt and auction of plants. The three main prizes were given to the respective winners.


To view the other orchid photographs taken during the show please go my facebook.
-Robert Ang-photo