This month's show attracted 142 plants from 17 members. A total of 22 classes were opened with an extra two third placings for groups with outstanding exhibits. The Best Plant of the show went to an entry by Mr. Lee Mok San - Paph phillipenensis- a very showy plant with more than 4 spikes. Photograph on the left shows Mrs. Lee posing with the Best Plant.

The runner-up, Vasco Prapawan, another showy plant with three spikes, went to 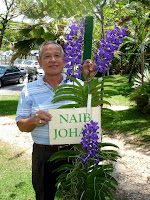 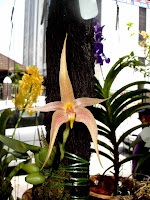 There will be no monthly show from now until the end of the year. Next month, POS will be holding their annual Orchid Nite Dinner on the 6th. at ICCC (Ipoh City & Country Club). All members are urged to support this event by buying a ticket for the dinner at RM30 each or RM300 a table. There will be an auction, lucky draw and treasure hunt during the dinner. Attractive prizes of orchid plants and hampers will be given to the lucky winners. Tickets can be obtained from the secretary, Francis or VP, Robert Ang (+6 012 4171380)
To mark this auspicious event, there will also be a 5 day orchid conmpetition and show from the 3rd to 7th November 2010 at Dataran Ipoh (Opposite Parkson/Ipoh Parade). More than 10 booths selling orchids will also be there during this period. 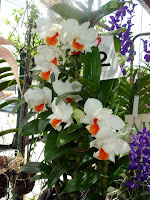 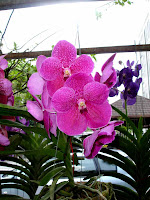 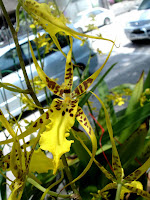 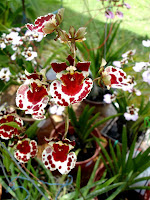