This month's show attracted only 113 plants. This was because Penang was holding a big show from 13th. to 21st. of this month and a few of our members supported their show as the prize money was more than ours. Although there was a decrease in quantity of show plants, the quality was not compromised. 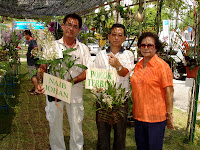 Best Plant of the Show

went to Eria atrovenusa, a plant submitted by our specie enthuasist, Raymond Chan. This very showy plant with more than 10 spikes was chosen first place by more than 10 members of the Society who were present and chosen especially to nominate the Best and runner up plant. The runner up was Epi stamfordianum, another showy specie entered by Cha Chuan Tuck. 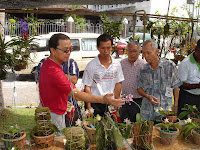 There were many enthusiasts and non-enthusiasts who visited our show. Mr Trimbak from India, on a visit to Ipoh, was presently surprised at the beauty of the orchids grown here. He paused and had a chat with our President, Dato' Dr. Majumder. 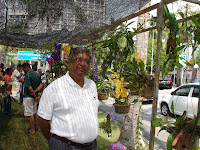 During the show, two new members signed up and joined our society. They are Mr. Kok Kian Seng and Mr. Wong Man Loong, all new comers to the orchid game. We welcome them and hope they will contribute to make POS the best in Malaysia.

Posted by Robert Ang at 5:03 PM No comments:

This month, our show attracted a record number of enteries. Twenty nine members brought in a total of 190 plants for our show. This high turnout is significant because there was also another show on the same day with the same prize money and even then our enteries exceeded that of last month by a big margin.

The Show Manager was Mr Robert Ang and Chief Judge was Mr Leong Tuck Lock. The other

Best Plant of the Show went to Mr Theow Kim Fook, a new member, who entered a Bulbophyllum graveolens and the runner up went to Mr Liew Chee Seng who entered a Dendrobium D'bush Pansy. This same plant was awarded Best Hybrid in the Johore Show.

Posted by Robert Ang at 5:56 AM No comments: