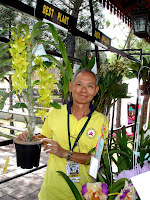 Agrofest, an annual event to celebrate farmer's day in Perak, normally held in Sungai Siput (Infotec) and originally earmarked to be held at the end of last year was cancelled. Early January this year, it was announced that it will be held instead at a sleepy town in Parit Buntar, along the idyllic meanders of Sungai Kerian.

The town, as if rejuvenated, woke up and on 12th January 2012, scores of cars and buses ferrying people from nearby towns created traffic jams and the whole town became the center of attraction.

Our orchid show was organised within days and we only informed our members less than 10 days before the show commenced. Our committee was worried that we may not have enough orchids for the show.

On 12th morning, our expectations changed and as usual this show was well supported with nearly 300 plants entered by 28 participants. Not only were there many plants but also most of them were show plants of high quality. Please do not believe what we say but visit our Perak Orchid Society facebook to view all the orchid photographs taken by Mr. Robert Ang and form your own opinion.

The Cattleya, Phalaenopsis and Paphiopedilum sections were very strongly supported and there were so many plants that some have to be placed on the floor.

Two groups of judges led by Miss Peggy Tan and Mr. Leong Tuck Lock had a hard time voting for the winning plants.

11 sections with 50 classes were opened and Best Plant of the Show went to Mr. Hew Fook Yong with his entry of Cyc. Anne-Kathrin Berger x cooperii, a healthy plant with 2 spikes bearing more than 15 flowers each. According to him, this plant originally had 3 spikes and he had to cut of one as it had overbloomed.

The Best Runner-Up Plant, a Bulb. aff. lepidium, with more than 50 flowers was entered by Mr. Johnny Neoh.

The Best Species went to Mr. Sin Chan Wah from Cameron Highlands with his entry of Den. finesterae. 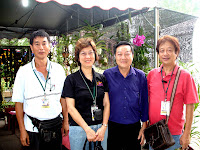 We were honored to have Miss Peggy Tan, President of OSSEA (Orchid Society of South East Asia) who came all the way from Singapore especially to be our international judge. In the photograph she is seen with Mr Choe Kim Fah (President of the Perlis Orchid Society) and Mr. Low Siam Leng (President of FOMOS Penang) and Mr. Robert Ang from Perak Orchid Society.


One very interesting event was this fisherman in his boat fishing for prawns in the sluggish Sungai Kerian. As we were watching him fish, he was conversely watching the orchid show. He started his outboard motor and came ashore, walked up to our sales booth and in 5 minutes bought 3 pots of catesetum. Before you can say Jack Robinson, he was back in his boat and speeding away back to his home in Kedah. just across the river to safeguard his precious cargo from the searing sun. 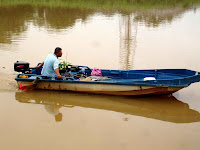 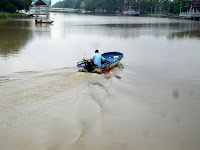 We had so many visitors to our show. I think more than 100 thousand people visited Agrofest and our vendors have had a field day selling almost all their stocks. Many from the nearby university (USM) also came to visit our show and in particular, Mr Saber M A Alkasseh from Palestine who showed great interest in orchids and asked many questions regarding the cultivation of orchids and whether it can be grown in their own country. 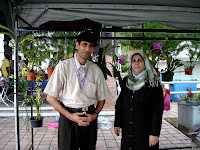 A word of thanks to all the committee members, judges and friends who have in one way or another worked so hard to make this show a great success.

We will have our monthly show at the Island between Ipoh Perade and DBI on the 3rd week of Febuary.
Other shows earmarked to be held in conjuction with Visit Perak Year, are as follow:

Please check our blog or facebook for further information regarding these shows.

Only a few photographs are uploaded to this blog. For more, visit Perak Orchid Society facebook 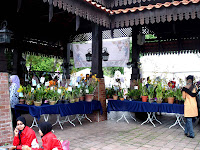 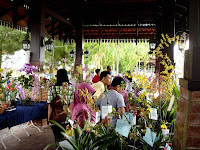